Yesterday I highlighted Psalm 37. David was feeling frustrated by his lot in life. He felt persecuted and under threat. He had a concern that bad people seem to prosper more than good people. He was angry, and was somehow hurting.

Despite all this, he stressed that God’s people should do good regardless of their circumstances.

After rhyming off a grocery list of increasing problems, he still summons the wisdom to say, “Hope in the Lord and keep his way” (Psalm 37:34).

Here’s what I mean. Quite often, just like David, we feel frustrated, angry or hurting. But we can’t let that define us. We need to keep moving forward with God’s “way”—his path and agenda. When we do that, it has a positive impact on our perspective. It doesn’t mean our hurts will vanish, but it does mean our perspective will improve because we’re still focused on doing God’s work.

I visited a woman in a nursing home who was frustrated that she couldn’t “do as much in the church as she used to.” I asked her if she believed in the power of prayer. “Of course,” she replied. So I asked her to pray morning and night for the church’s programs, it’s people, and our community. She agreed.

A few months later she told me she was doing it. Did it make all her problems go away? No. But she felt better about having a more specific godly purpose.

Friends, hurt is a part of life—but it doesn’t need to be the defining part.

“Hope in the Lord and keep his way.”

–Today’s “Up!” is based on my latest podcast called “How having a purpose helps with the pain.” You can listen in here. Enjoy! 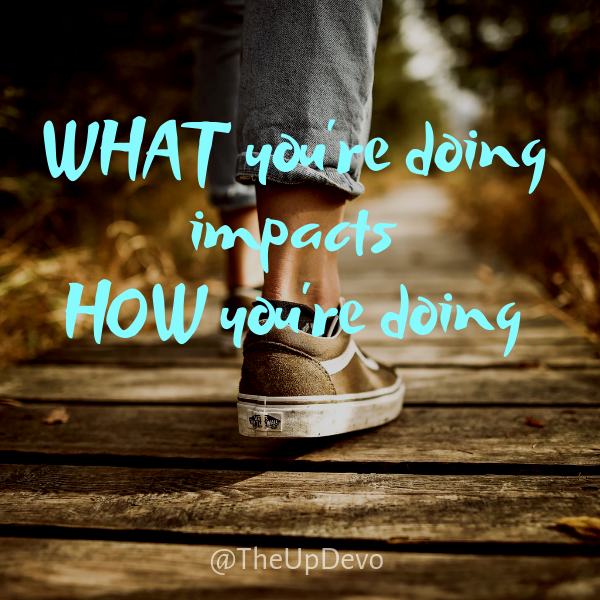