This week I’ve been highlighting some tools you can use in the war against fear, whether it be fear of the unknown, illness, or financial problems. But I’m calling them weapons. These aren’t physical weapons, but spiritual ones.

There are many weapons we could use. But here I’m highlighting what I think we can pick up and brandish quickly.

Today’s weapon is “acts of service.” It’s about helping or serving others.

Here’s why it matters in the war against fear: Fear feeds on you feeling useless. It senses when you feel paralyzed by how big something is, and pounces on how small you feel.

But guess what. You’re not.

First of all, what Paul says in Ephesians 2:10 applies to followers of Jesus today too: “For we are God’s handiwork, created in Christ Jesus to do good works…”

Second, when you serve others as the hands and feet of Jesus, God can work through you. As Paul says later in Ephesians 3:20: “Now to him who is able to do immeasurably more than all we ask or imagine, according to his power that is at work within us…”

His power that is at work within us.

Mark Batterson tells a story about his friend Joel who was serving at a church in South Africa and feeling particularly “low” in his faith. One night he went to McDonalds with just enough money to buy a Happy Meal. But he noticed some street kids in the parking lot and felt God prompting him to buy them some burgers.

So he bought five junior cheeseburgers. But by the time he went over to the kids, the group had doubled in size! He thought about cutting the burgers in half so they would each get some. But as he started handing them out, they just kept on coming! There was enough for every kid to get a burger. And then, at the bottom, there was even one left for him.

Did McDonalds make a “mistake”? Or did God sizzle up some extras when Joel started to serve?*

One of the things I’ve discovered is that when you serve others you often see a Servant Saviour at work. Not only does it honour God and help others, but it beats back the fear who loves feeding on your feelings of uselessness.

“Now to him who is able to do immeasurably more than all we ask or imagine, according to his power that is at work within us…”

–This Sunday is Palm Sunday! My message is called “Hope when it hurts.” If you don’t have a church home, click here to sign up for a free email reminder which is sent out Sunday mornings and directs you to our live-stream.

–“Up!” is published Monday-Friday and returns on April 6. 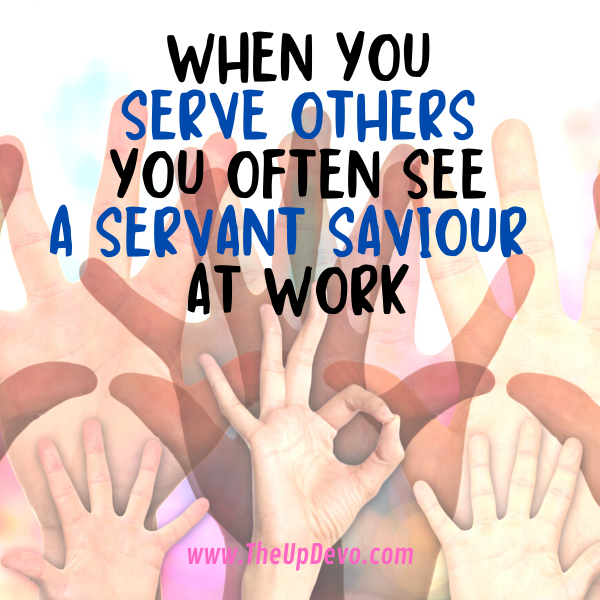